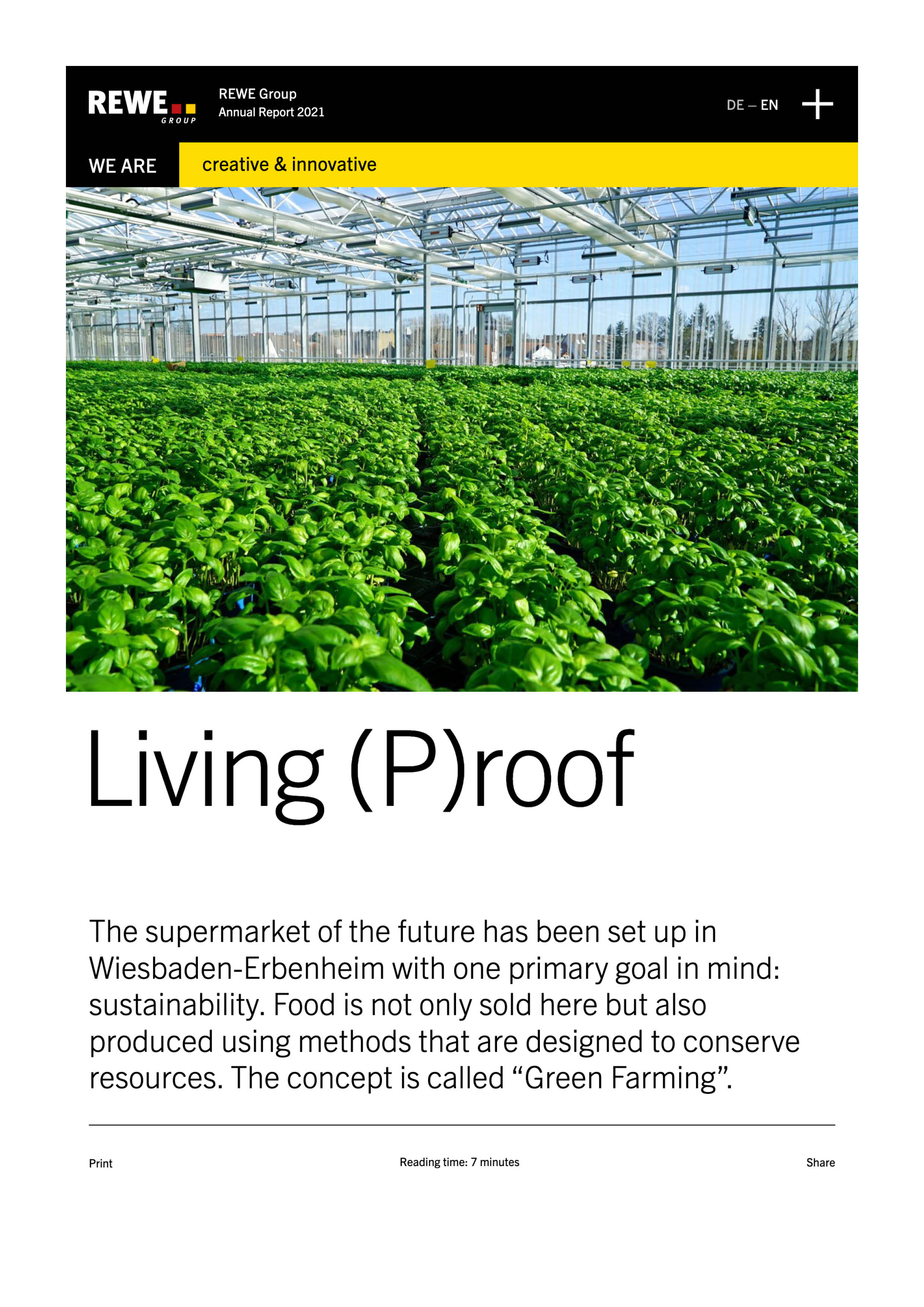 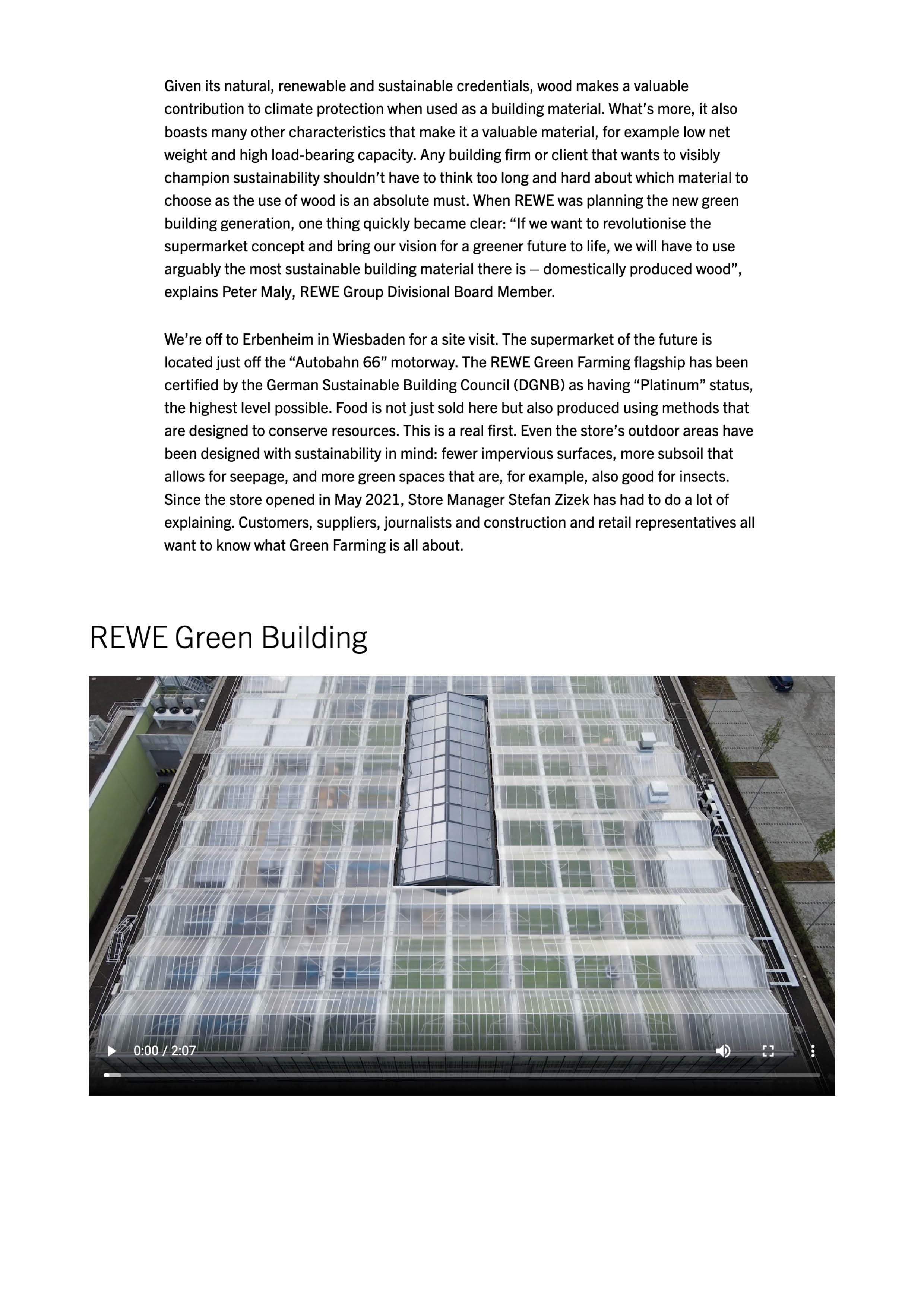 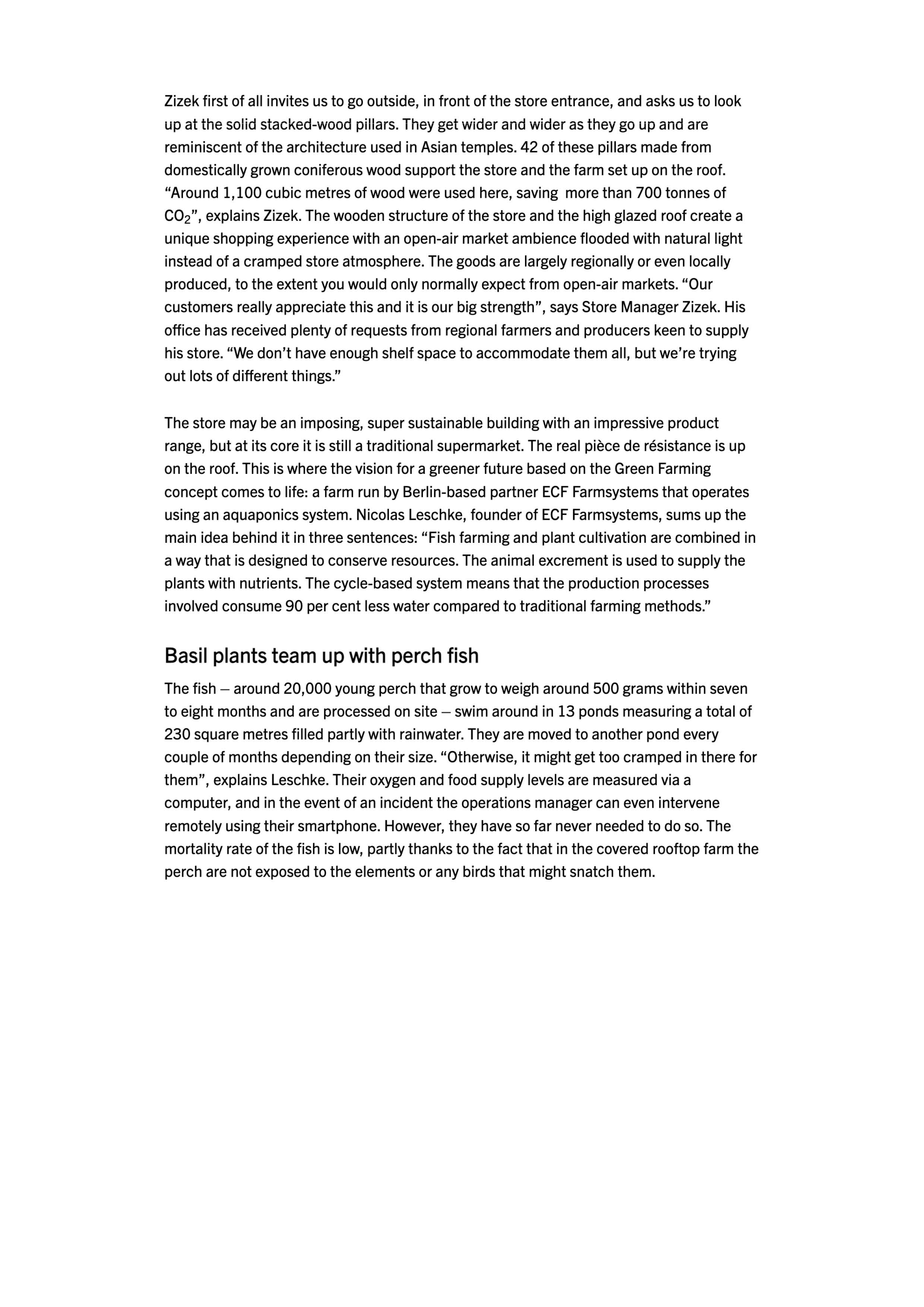 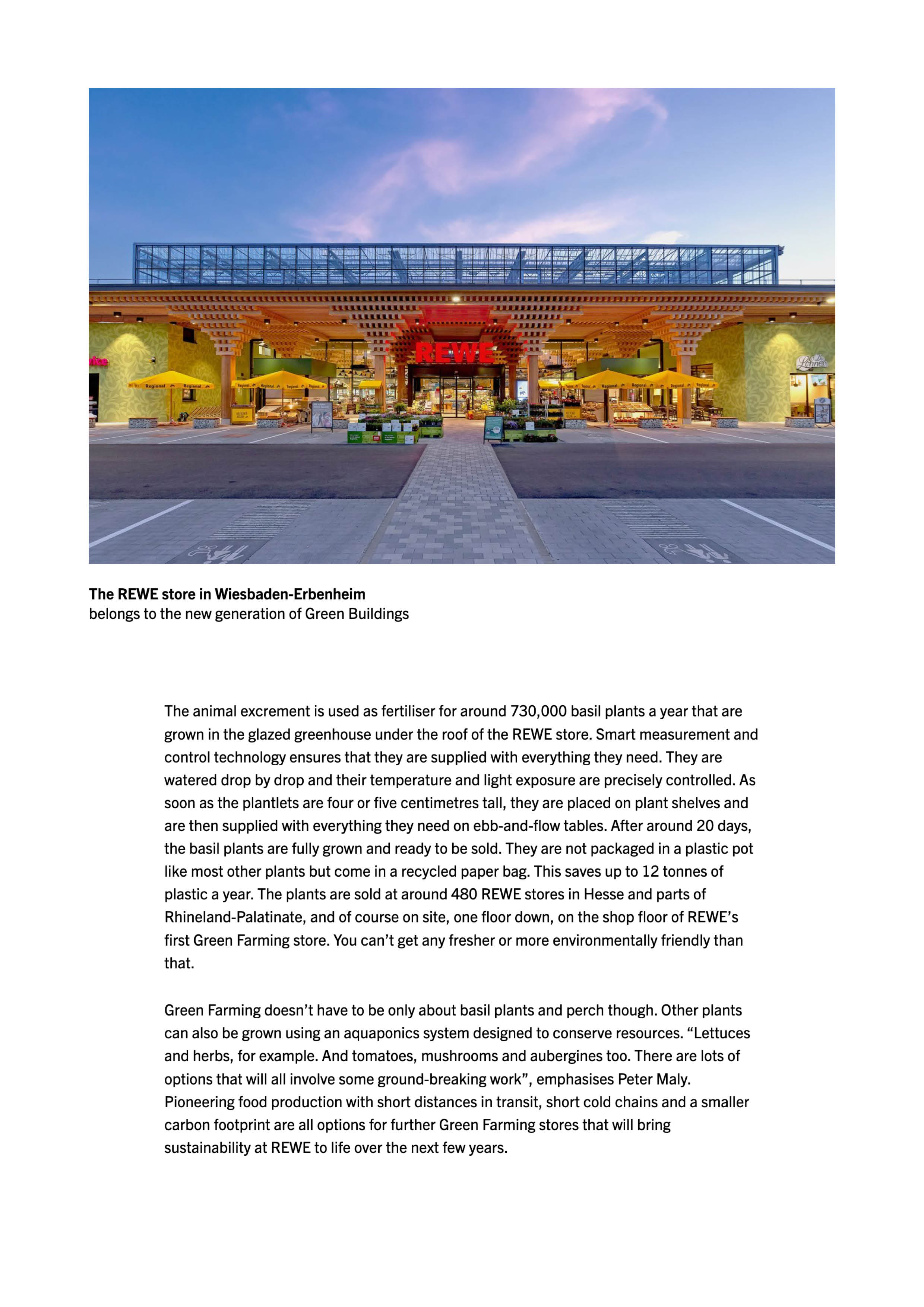 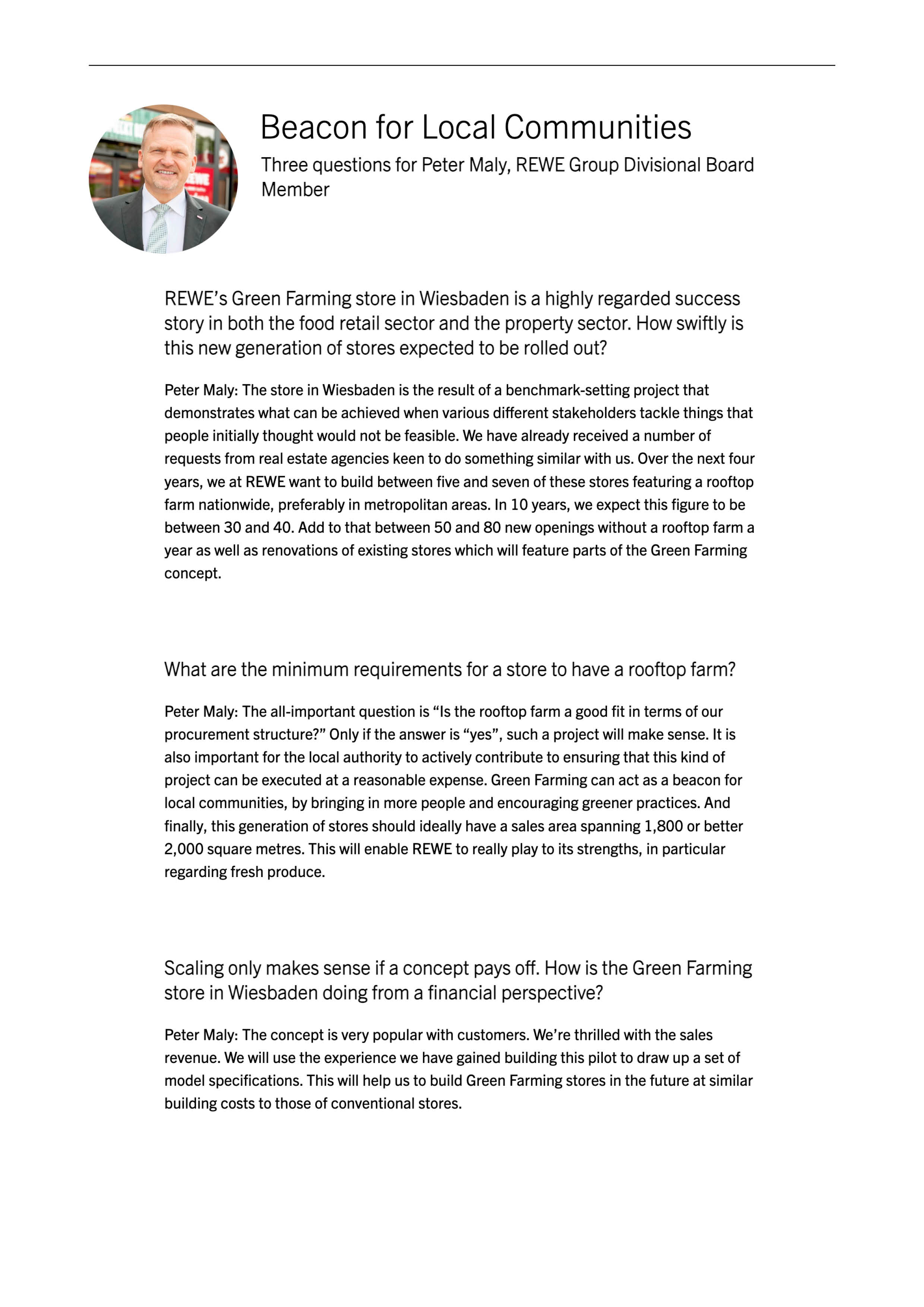 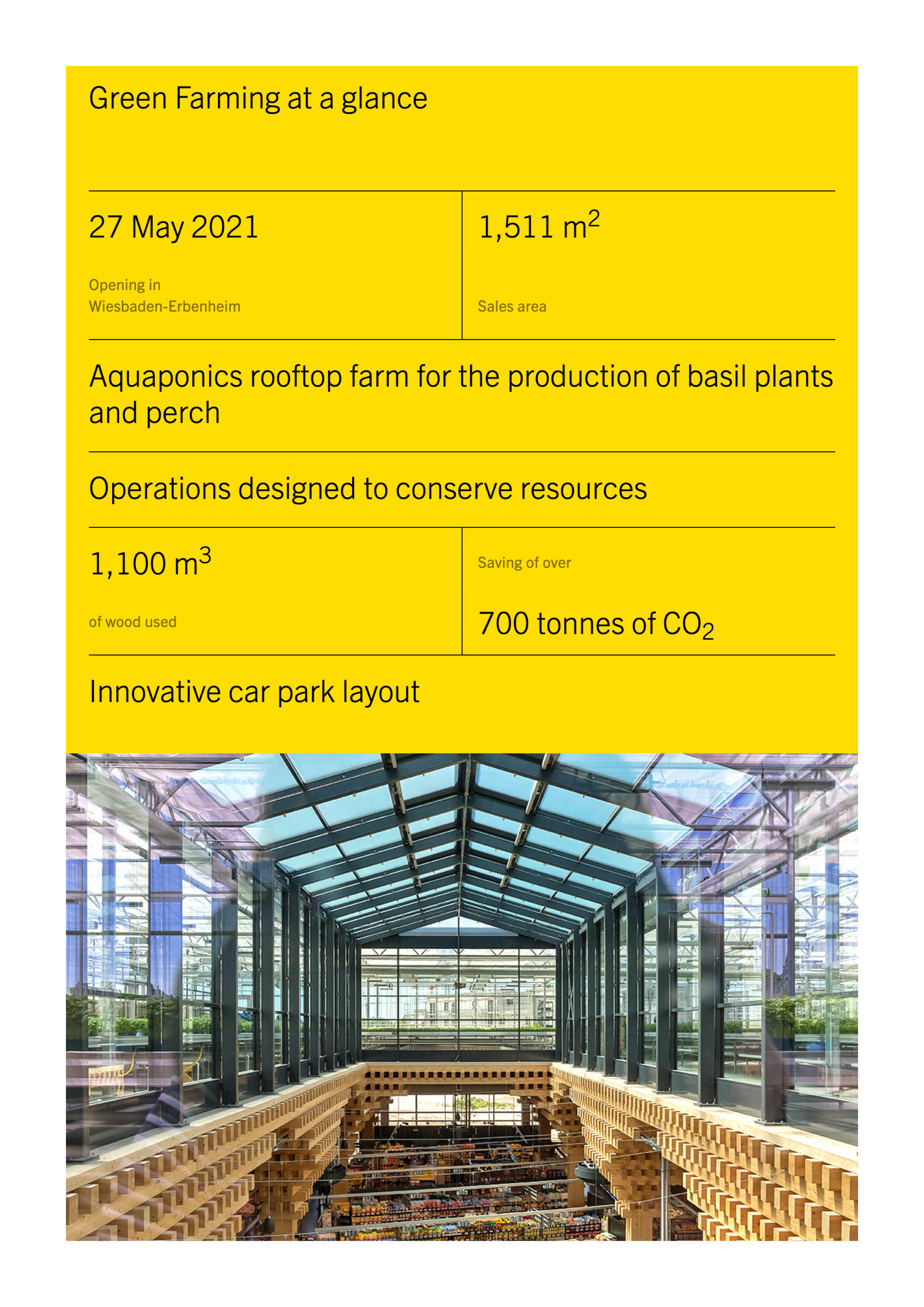 DE
–
EN
+
WE ARE
creative & innovative 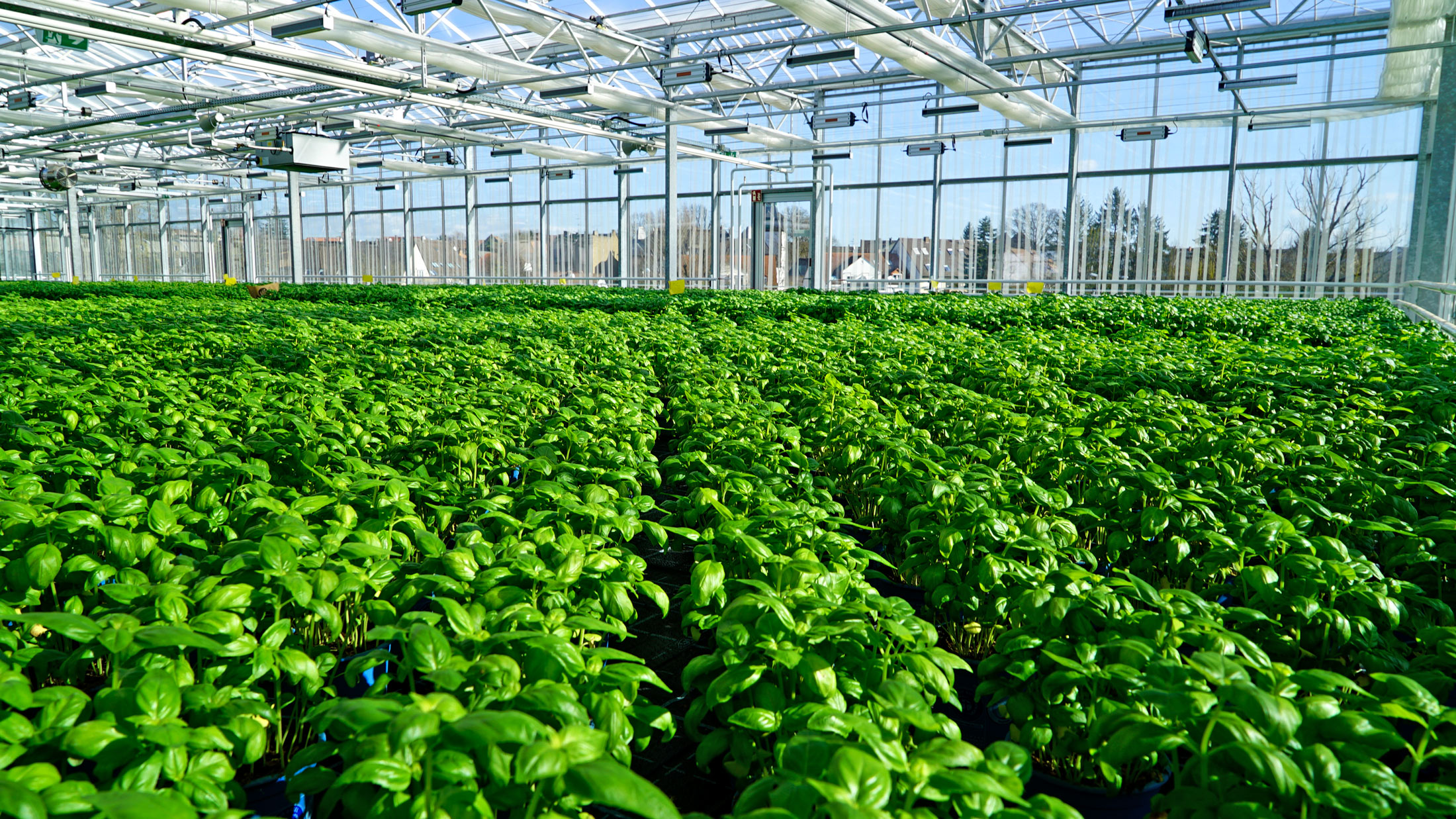 Green Farming at a glance
27 May 2021
Opening in
Wiesbaden-Erbenheim
1,511 m2
Sales area
Aquaponics rooftop farm for the production of basil plants and perch
Operations designed to conserve resources
1,100 m3
of wood used
Saving of over
700 tonnes of CO2
Innovative car park layout 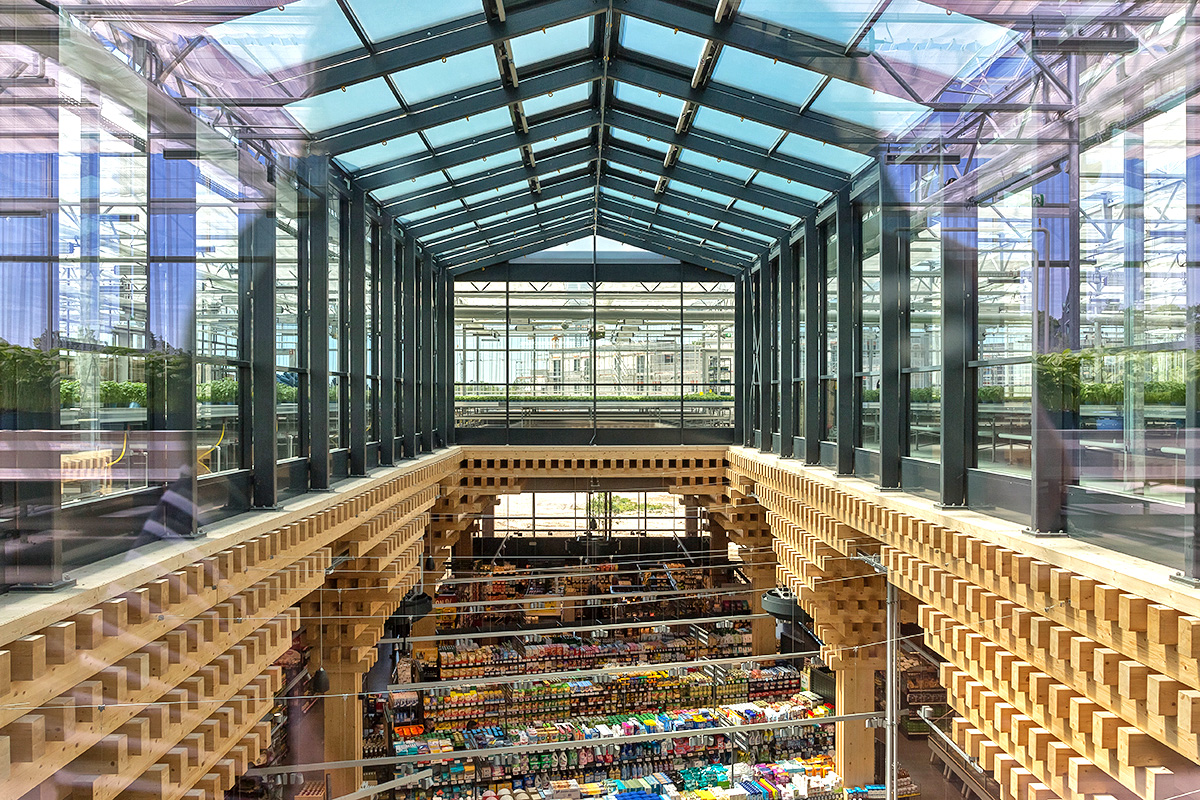 The supermarket of the future has been set up in Wiesbaden-Erbenheim with one primary goal in mind: sustainability. Food is not only sold here but also produced using methods that are designed to conserve resources. The concept is called “Green Farming”.
Print
Reading time: 7 minutes
Share

Given its natural, renewable and sustainable credentials, wood makes a valuable contribution to climate protection when used as a building material. What’s more, it also boasts many other characteristics that make it a valuable material, for example low net weight and high load-bearing capacity. Any building firm or client that wants to visibly champion sustainability shouldn’t have to think too long and hard about which material to choose as the use of wood is an absolute must. When REWE was planning the new green building generation, one thing quickly became clear: “If we want to revolutionise the supermarket concept and bring our vision for a greener future to life, we will have to use arguably the most sustainable building material there is – domestically produced wood”, explains Peter Maly, REWE Group Divisional Board Member.

We’re off to Erbenheim in Wiesbaden for a site visit. The supermarket of the future is located just off the “Autobahn 66” motorway. The REWE Green Farming flagship has been certified by the German Sustainable Building Council (DGNB) as having “Platinum” status, the highest level possible. Food is not just sold here but also produced using methods that are designed to conserve resources. This is a real first. Even the store’s outdoor areas have been designed with sustainability in mind: fewer impervious surfaces, more subsoil that allows for seepage, and more green spaces that are, for example, also good for insects. Since the store opened in May 2021, Store Manager Stefan Zizek has had to do a lot of explaining. Customers, suppliers, journalists and construction and retail representatives all want to know what Green Farming is all about.

Zizek first of all invites us to go outside, in front of the store entrance, and asks us to look up at the solid stacked-wood pillars. They get wider and wider as they go up and are reminiscent of the architecture used in Asian temples. 42 of these pillars made from domestically grown coniferous wood support the store and the farm set up on the roof. “Around 1,100 cubic metres of wood were used here, saving  more than 700 tonnes of CO2”, explains Zizek. The wooden structure of the store and the high glazed roof create a unique shopping experience with an open-air market ambience flooded with natural light instead of a cramped store atmosphere. The goods are largely regionally or even locally produced, to the extent you would only normally expect from open-air markets. “Our customers really appreciate this and it is our big strength”, says Store Manager Zizek. His office has received plenty of requests from regional farmers and producers keen to supply his store. “We don’t have enough shelf space to accommodate them all, but we’re trying out lots of different things.”

The store may be an imposing, super sustainable building with an impressive product range, but at its core it is still a traditional supermarket. The real pièce de résistance is up on the roof. This is where the vision for a greener future based on the Green Farming concept comes to life: a farm run by Berlin-based partner ECF Farmsystems that operates using an aquaponics system. Nicolas Leschke, founder of ECF Farmsystems, sums up the main idea behind it in three sentences: “Fish farming and plant cultivation are combined in a way that is designed to conserve resources. The animal excrement is used to supply the plants with nutrients. The cycle-based system means that the production processes involved consume 90 per cent less water compared to traditional farming methods.”

The fish – around 20,000 young perch that grow to weigh around 500 grams within seven to eight months and are processed on site – swim around in 13 ponds measuring a total of 230 square metres filled partly with rainwater. They are moved to another pond every couple of months depending on their size. “Otherwise, it might get too cramped in there for them”, explains Leschke. Their oxygen and food supply levels are measured via a computer, and in the event of an incident the operations manager can even intervene remotely using their smartphone. However, they have so far never needed to do so. The mortality rate of the fish is low, partly thanks to the fact that in the covered rooftop farm the perch are not exposed to the elements or any birds that might snatch them. 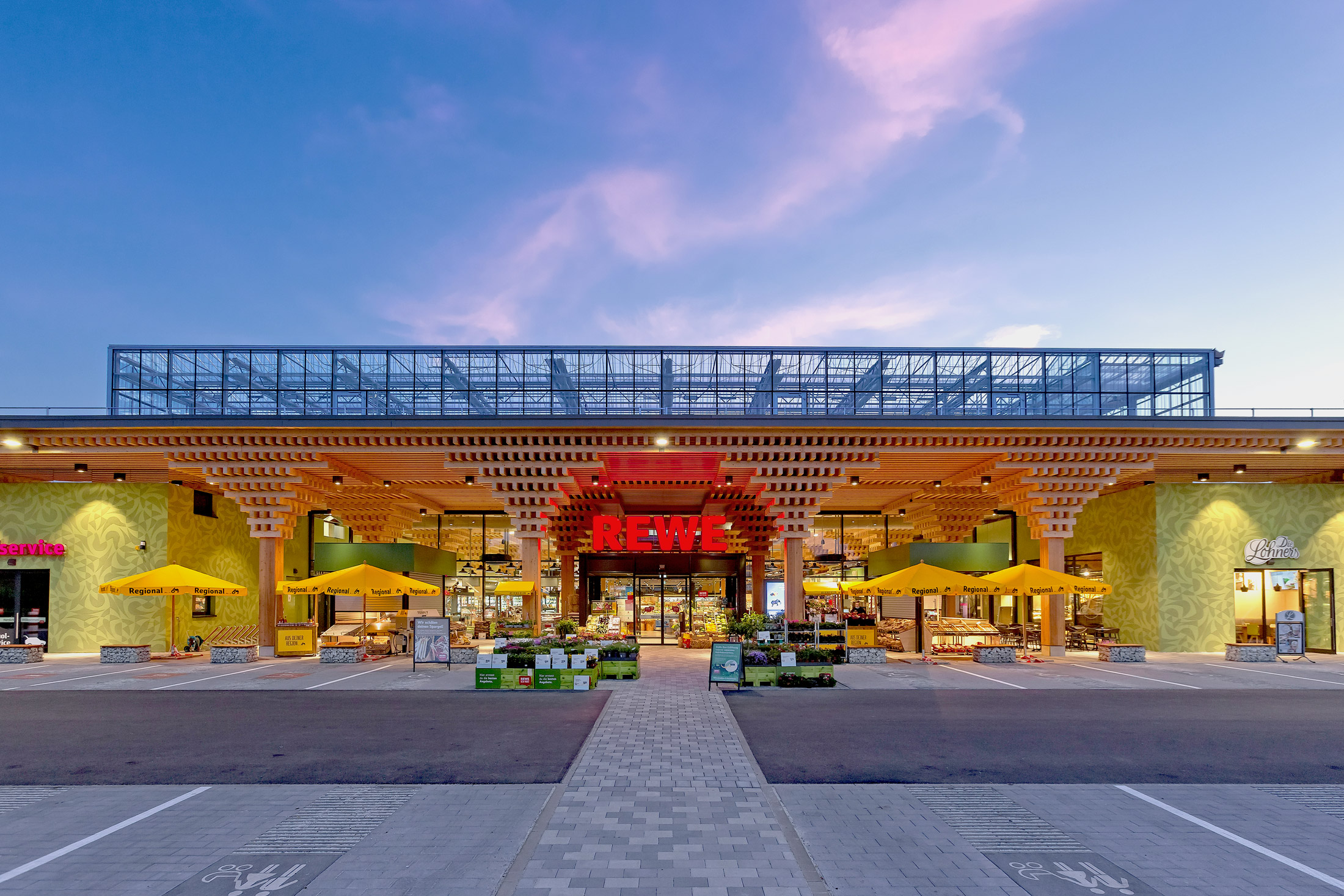 The animal excrement is used as fertiliser for around 730,000 basil plants a year that are grown in the glazed greenhouse under the roof of the REWE store. Smart measurement and control technology ensures that they are supplied with everything they need. They are watered drop by drop and their temperature and light exposure are precisely controlled. As soon as the plantlets are four or five centimetres tall, they are placed on plant shelves and are then supplied with everything they need on ebb-and-flow tables. After around 20 days, the basil plants are fully grown and ready to be sold. They are not packaged in a plastic pot like most other plants but come in a recycled paper bag. This saves up to 12 tonnes of plastic a year. The plants are sold at around 480 REWE stores in Hesse and parts of Rhineland-Palatinate, and of course on site, one floor down, on the shop floor of REWE’s first Green Farming store. You can’t get any fresher or more environmentally friendly than that.

Green Farming doesn’t have to be only about basil plants and perch though. Other plants can also be grown using an aquaponics system designed to conserve resources. “Lettuces and herbs, for example. And tomatoes, mushrooms and aubergines too. There are lots of options that will all involve some ground-breaking work”, emphasises Peter Maly. Pioneering food production with short distances in transit, short cold chains and a smaller carbon footprint are all options for further Green Farming stores that will bring sustainability at REWE to life over the next few years. 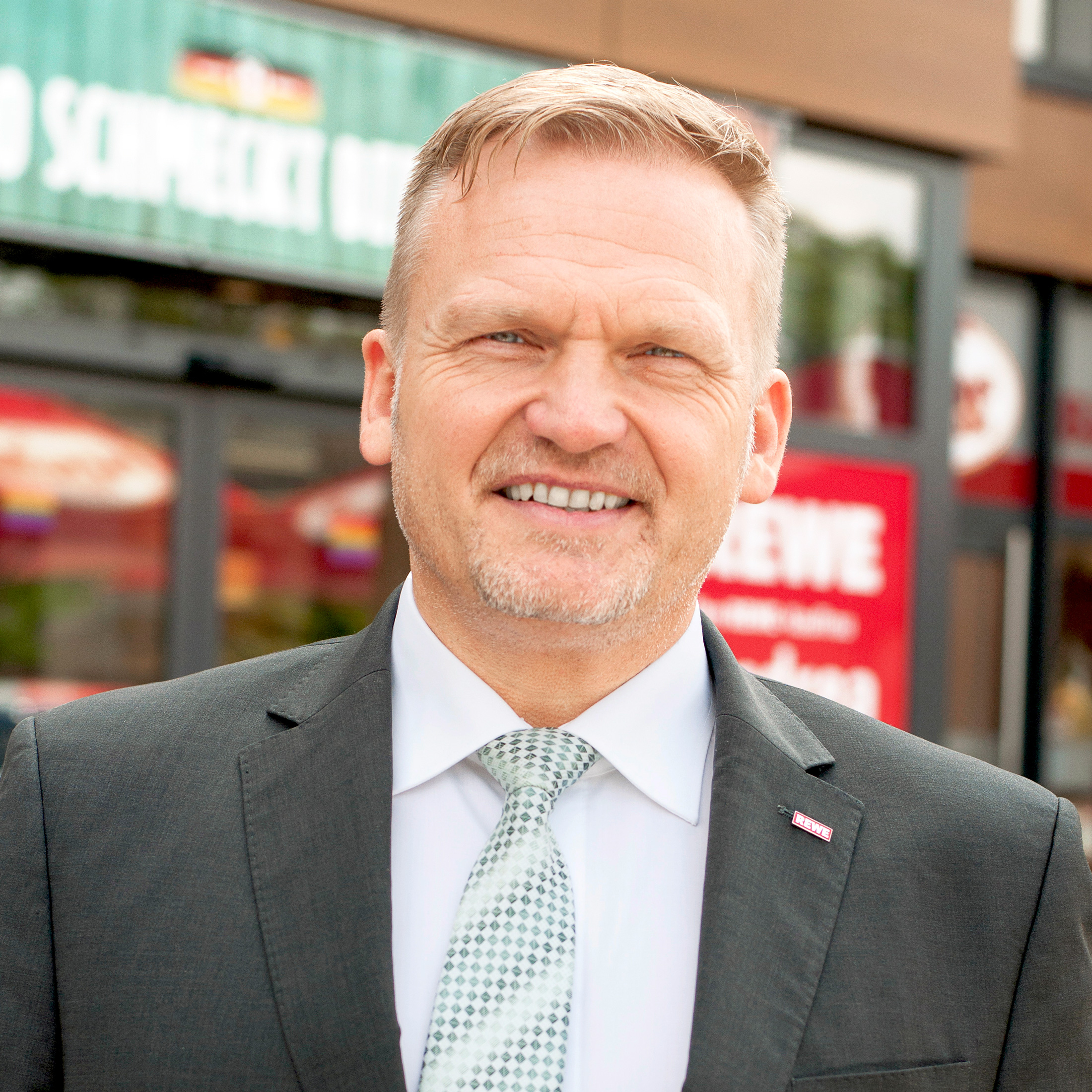 REWE’s Green Farming store in Wiesbaden is a highly regarded success story in both the food retail sector and the property sector. How swiftly is this new generation of stores expected to be rolled out?

Peter Maly: The store in Wiesbaden is the result of a benchmark-setting project that demonstrates what can be achieved when various different stakeholders tackle things that people initially thought would not be feasible. We have already received a number of requests from real estate agencies keen to do something similar with us. Over the next four years, we at REWE want to build between five and seven of these stores featuring a rooftop farm nationwide, preferably in metropolitan areas. In 10 years, we expect this figure to be between 30 and 40. Add to that between 50 and 80 new openings without a rooftop farm a year as well as renovations of existing stores which will feature parts of the Green Farming concept.

What are the minimum requirements for a store to have a rooftop farm?

Peter Maly: The all-important question is “Is the rooftop farm a good fit in terms of our procurement structure?” Only if the answer is “yes”, such a project will make sense. It is also important for the local authority to actively contribute to ensuring that this kind of project can be executed at a reasonable expense. Green Farming can act as a beacon for local communities, by bringing in more people and encouraging greener practices. And finally, this generation of stores should ideally have a sales area spanning 1,800 or better 2,000 square metres. This will enable REWE to really play to its strengths, in particular regarding fresh produce.

Scaling only makes sense if a concept pays off. How is the Green Farming store in Wiesbaden doing from a financial perspective?

Peter Maly: The concept is very popular with customers. We’re thrilled with the sales revenue. We will use the experience we have gained building this pilot to draw up a set of model specifications. This will help us to build Green Farming stores in the future at similar building costs to those of conventional stores.

Share
— The Benefit of Acting Locally
— Perfect for on the Go

— The Benefit of Acting Locally
— Perfect for on the Go